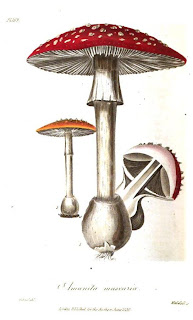 I unfortunately missed the Week Six Summary, due to Christmas and a killer migraine that took the better part of a week to clear. I eased up my militant no alcohol, no dairy, no gluten diet in the run-up to Christmas. I've a lot to celebrate this year (found out what had wrecked my life, found a doctor to treat it, despite the usual nightmares with the NHS and Lyme), and felt like cutting loose a bit. Plus I've felt like death for most of the year, so feeling substantially better on the mushrooms, I thought I'd celebrate that too. My boils and impetigo all came back, but have largely gone now since giving up the dairy, alcohol and gluten again.

I'm actually halfway through Week Eight now, and settling into a good routine. Since the amount of fly agaric required seems to vary so much, probably due to the varying amount of bacteria and neurotoxins, I've changed my attitude to dosage. Instead of trying to find my perfect dosage, I now just take three drops under the tongue when I feel my cognition waning, which is generally every couple of hours.

I've had a lot more bacteria die-off, due to being on antibiotics now, and also freeing up the areas in my jaw/neck/shoulder/back/pelvis that are stuck together with what I believe are borrelia colonies. They crack and crunch and spike you like crazy, but bit by bit become softer and more free. Sometimes there's a big movement, and suddenly I can move a part of my body again. I actually wiggle when I walk again now, instead of moving like a robot.

As well as stretching, movement, deep tissue massage and ultrasound, I've now found something else that really helps the pain and discomfort in areas colonised by the borrelia bacteria ... the external application of fly agaric tincture!

I should add, my experiences on fly agaric tincture may be closely related to the species of borrelia I have. According to a Melisa LTT test, I am infected with Borrelia afzelii and Borrelia garinii. Afzelii tends to affect the nervous system the most, and garinii tends to favour connective tissue, especially tendons.