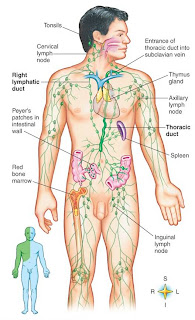 I have recently found out that my lymphatic system is almost totally blocked in some areas, and has been for many years. This can happen as a result of a bacterial infestation such as Lyme disease. It can also happen as a result of parasitic infestation, which is not uncommon as a co-infection of Lyme disease. People mostly get infected with Lyme disease by ticks, which are characterised as "nature's dirty needle" because they carry so many vile things.

Edit 2/2/12: I don't know if it's physically possible to have such a blocked lymphatic system. It could be crystallised neurotoxins along the muscles near the lymphatic system. Whatever it is, it's breaking down, and my pain is decreasing as it does so.

Before my LLMD (Lyme Literate Medical Doctor) informed me that I was engaging in lymphatic drainage, I had thought that I was massaging calcarised tendons or muscles, as they were so solid. Over the last few weeks, I've been rubbing fly agaric tincture onto the skin above these blocked areas of my lymphatic system. I've also been blasting them with a portable ultrasound machine I have, which has really helped, but here we're concerned about the effects, if any, of the fly agaric tincture.

I don't pretend to understand the mechanisms of any of this, but I have found that:

All five muscarinic subtypes have been detected in human lymphocytes; however, receptor subtype expression appears to vary by individual.

The fly agaric tincture will not be enough by itself to normalise the lymphatic system. Supporting treatments include Manual Lymphatic Drainage, self massage, exercise and herbal support.

Edit 17/2/12 - Since writing this post I've seen a lymphatic drainage massage specialist, who has confirmed that my lymphatic system is blocked in places. Even after just one session I've felt incredible benefit. I've had a clear head and not suffered the harsher "dementia symptoms" of neuroborreliosis since that first treatment. I had a lot of lymph build-up at the back of my head, which must have been keeping the neurotoxins in the back of my head, where they caused the dementia-like symptoms and problems with my autonomic nervous system, such as hypocapnoea.

Edit 23/1/13 - It now seems likely that the hardness and pain from my lymphatic system may have come about as a result of infestation by a lymphatic nematode or roundworm. These are apparently common even in temperate areas, but aren't normally a problem. When combined with a lack of movement and/or other infection, they can become problematic. I've found ultrasound to be best at breaking down these hard areas, although I always get an increase in neurotoxin symptoms when I do this. Almost constant movement really helps as well, as does keeping warm and hydrated. Cleavers/goose grass/sticky willy is great to help clean out the lymphatics. I'm still not quite done getting rid of it all, but I'm ever closer.