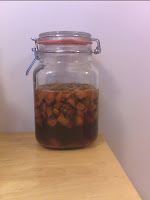 1. The chopped mushrooms have been soaking in vodka for 10-14 days now, so it's time to strain them and complete the tincture. The colour in the jar doesn't really show here, but it's a beautiful golden red.

It's been sitting in the sun for this time, as this is the advice for most tinctures, but it may well be that it would be better in the dark. I really don't know. The liquid is really clear though and smells good too. 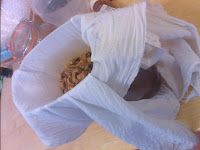 2. The contents of the jar need straining first. I've borrowed my boyfriend's muslin cloth that he uses for wine making, but an old pair of tights would probably work just as well.

I've just left this to strain for an hour. I'm not sure whether to squeeze the mushrooms and get every last little drip out of them. I just let them drain with the first couple of batches, then put the mushrooms in the composter. But now the harvesting season's at an end and there's a finite supply, I've given these ones a good squeeze.

I'm going to save the squeezed mushrooms to try and cultivate the mycelium. More on that in a later post, fingers crossed! 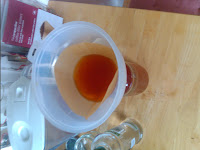 3. I then run the liquid through a coffee filter. As you can see in the image of the completed jar (below), there is some white stuff that accumulates at the top of the jar. I think that this is the mushroom spore, which is definitely white, and small enough to get through the coffee filter.

The liquid itself is a gorgeous reddy golden amber colour. 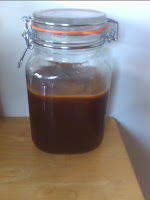 Mushroom spore shell is made of the hardest yet lightest natural substance we know of. People such as Terence McKenna have posited that it's light enough for the spore to be blown anywhere on the planet, even into the upper atmosphere.

It is then hard enough to survive being sucked through the atmosphere and can be blown across the empty vast distances of space, perhaps eventually being sucked into another planet's gravitational pull, and forming a new colony in an alien land. 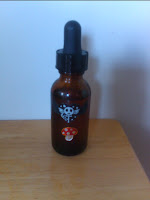 4. The tincture is then decanted into bottles. It's a good idea to label these to show what they contain, and with a warning that the contents are poisonous (if taken in excess).

I bought some stickers from eBay for this, some nice shiny fly agarics to show the contents, and some skulls to warn poison. The skulls however are from Nightmare Before Christmas, and look unbelievably cute. Best to keep out of reach of children. And teenagers.