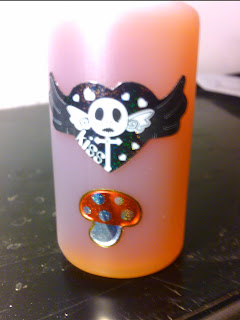 Week 3 has been good. I've continued to be active both physically and mentally, and have had no insomnia. In fact my confidence has been such that I've broken a little from the no alcohol, no dairy and no gluten diet I've been on since February.

The only trouble I've had is getting the tincture dosage right, and this has definitely affected my perception here and there.

The fly agaric tincture has matured now, after sitting in the sun for 10-14 days covered in vodka. So this week I stopped eating small pieces of frozen cooked mushroom and started on the tincture. The changeover hasn't been as easy as I'd expected. The tincture is much stronger than I thought.

I'm currently taking various other tinctures to help with the symptoms and cause of Lyme disease - Banderol, Cumanda, Milk Thistle, St John's Wort and Sarsparilla. I'm also on a month-long anti-parasitic regime of tinctures of Wormwood, Clove and Black Walnut Hull. The dosage for these tinctures is generally around 10 drops 3 times a day, so I decided to start with that amount of fly agaric. That proved to be a mistake.

I was taking way too much fly agaric tincture. I was actually getting some of the effects typical of "vision questing" with it, without intending to. I didn't realise this, as the overall effect can be quite similar to Lyme symptoms (drowsiness, blurry vision, a sense of timelessness, distancing or separateness from what is generally considered to be reality, a lack of insight into some things, a little macropsia/micropsia - things becoming big or small).

I've never taken fly agaric for any purpose other than in these very small quantities for treating the Lyme symptoms these last few weeks, so I didn't know what it would be like to take it in larger quantities. It wasn't scary or anything (it removes fear anyway, one of the reasons why warriors such as berserkers would go into battle on small amounts!), but it must have altered my perceptions to some degree, as I simply wasn't aware that I was taking too much.

In other words, I don't think you can rely on your perception to get the dosage right. I think it's better to go with the numbers, and keep the dosage really small. Just enough to oil the processes of thought, memory and movement. Like oiling a squeaky door or a machine with moving parts, just a drop here and there.

A gentleman on the Lyme forum I frequent is also taking fly agaric tincture for Lyme, given him by a qualified herbalist. He has been on the tincture for a few weeks now, and has found that 2 drops 3 times a day works best for him. I'm going to follow his advice this week, and stick to that. I've also decided to take one day off from it a week. To this end I took none today, and had plenty of energy and felt bright mentally all day.