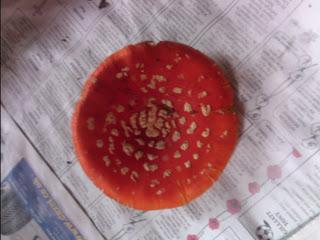 I've got chronic Lyme disease, caught from a tick bite many years ago, and it's almost impossible to get diagnosis and treatment here in the UK (and in many other countries). So people with Lyme disease either have to find a doctor who understands and can treat it (pretty much always private and also very rare and expensive), or try to treat it themselves. I've started this blog to document a treatment I'm trying: fly agaric tincture.

Chronic Lyme disease can hit your nervous system and brain really hard. It's estimated that you lose 30-50 IQ points while chronically infected (sorry, I'll try to include some links to relevant research at some point). It makes any sort of rational thought pretty much impossible. So bear with me - there's a good chance this narrative will jump all over the place.

With most treatments for Lyme disease, it's really difficult to tell whether it's working or not. Generally, if a treatment regime is having the desired effect and killing off some of the bacteria, you'll actually feel worse. This is believed to be because the bacteria as they die give off neurotoxins, which knock you for six. When a whole load of bacteria die off at once, it can produce a Herxheimer effect, first noted in syphilitic patients. This is an acute increase in symptoms, and usually lasts a few days. My first one involved nausea and an extreme thirst.

Taking the fly agaric is a completely different experience. I hasten to add, I'm just taking the fly agaric in tiny doses, nowhere near enough to get high, hallucinate or trip out. This treatment isn't about that. It's just about finding something that can either fight the bacteria, restore some quality of life, or even both.

There are many caveats with fly agaric (Amanita muscaria). In very large doses it can kill. In smaller doses it can alter your perceptions and cause you to hallucinate. In tiny doses there seems to be much less risk, but this cannot be described as a risk free treatment. I'm not suggesting anyone try this themselves. I just want to record my own experiences. Also, the amount of active chemicals in the mushrooms can vary massively, depending on the time of year, method of preparation and other unknown factors. Even two mushrooms growing side by side at the same time, prepared the same way, can result in very different levels of active chemical. This makes dosing very difficult. It seems best to start with very little. 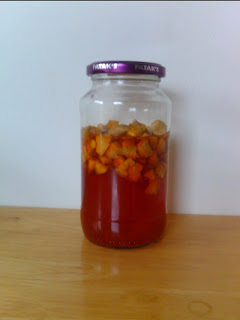 I don't think it's possible to buy fly agaric tincture anywhere, so I realised I would need to make my own. Despite a couple of years of being completely crippled with chronic Lyme, I'm now able to walk around a bit most of the time, and was able to find four fly agaric growing wild (I'll expand on identification and collection in another post). Finding little information on the web, I decided to try several different methods of preparation and preservation.

I didn't want to wait 2-3 weeks for a tincture to be ready, so determined to chop, fry and freeze the first mushroom. I chopped another and preserved it in vinegar. I chopped another and covered it in vodka (32%-40%) to make a tincture. The last one I set air drying, intending to eventually crumble it into tea. I'll go into the actual methods in more detail in another post, and link to the articles that gave me the ideas.

The initial dose was a seventh of a cap, eaten with breakfast. Within half an hour I began to feel more alert and aware. I spend most of my time lying around feeling like death, but within an hour I was up and about and feeling very lively. I cycled into town and did some chores. There was no "coming up" rush, no hallucinations or change in perceptions beyond feeling lively and really up for it. It was the best day I've had in an awfully long time. Probably years. At no point did I feel any stomach cramps or nausea, possibly because of the small dose, possibly because the mushroom had been cooked.

The liveliness wore off in the late afternoon, and I did get pretty tired. I was back out for more fresh air and exercise though. Actually I went out looking for more mushrooms! This is the first treatment I'd tried that undoubtedly makes you feel better.

I mentioned this experiment on the Lyme disease forum I frequent. Within an hour of taking the first bit of mushroom, I felt I might be onto something, and wanted to let someone know, in case I was run over by a bus or something. To my astonishment, someone on the forum had ten days earlier been given a bottle of fly agaric tincture by a top herbalist, to treat the "head fog" or mental confusion that goes along with chronic Lyme. He was told to put a couple of drops under his tongue every half hour until his head felt clear. I've since found out that you can get fly agaric tincture on prescription in Germany.

I was certainly very tired that evening. I'd done a lot more physically than I normally would in a day. I slept very well that night.

Day 2 I took half the amount of fried and frozen and refried mushroom at breakfast, taking the other half of a seventh of a cap later in the afternoon. This was to try and even out the energy levels throughout the day. Again, I found I had energy and mental clarity way beyond what I've become accustomed to. The best way to describe it is that it is as if an enchantment has been lifted. The chronic fatigue aspect of Lyme seems to disappear. Last week it was a huge effort to just try and think around a simple chore, let alone do it. This week, the chores are simply done, in less time than it would normally take to try and get your head round what needs doing. It's starting to feel quite miraculous. Needless to say, I was out hunting for more mushrooms again.

I'm still not letting myself get too over-excited though. In the summer I took a month long course of Korean ginseng, to try to get some energy. The first couple of days I felt all right, but then was much worse for the rest of the summer, without a single "good day". I've since found out that ginseng can feed the energy of the bacteria and actually make you feel worse. I'm hoping that the same thing isn't true of fly agaric.

I had trouble getting off to sleep that night, and thought that perhaps I had taken too large a dose in the afternoon. It's already becoming clear that multiple tiny doses, such as tincture drops, would be a much better way of administering the fly agaric, and managing the levels you're taking.

Day 3 I took a similar amount to Day 2, but missed out the afternoon dose. I think even my small doses are possibly too large. Energy levels and mental clarity continued to be astonishing. My long-suffering boyfriend is amazed at the change in me. He even got breakfast in bed this morning.

Again I was out mushroom hunting. It's getting near the end of the season, so it makes sense to collect them now. In exchange for taking the mature mushrooms, I plant some fly agaric spore, which is found in the gills of the mature mushroom. I'll go into more detail in another post at some point.

I missed the afternoon dose but still had trouble getting to sleep. I should add, insomnia is one of the symptoms of chronic Lyme, and comes and goes. It could be unrelated to the fly agaric experiment.

I've given up the other methods of storing the mushrooms (pickling, drying and freezing). With the pickled mushroom, all the red colour was leaching into the vinegar, and I was concerned that the active chemicals might end up in the vinegar. I've also decided to dry the mushrooms for a few days before making the tincture. From my experiments so far, this should ensure a deeper red hue in the tincture. Since it was the colour that drew me to the fly agaric in the first place, this seems important.

EDIT It seems it wasn't the drying that made the colour brighter. There was an immature mushroom in one batch (it had been kicked over so I bagged it up) and the colour is much brighter before they reach maturity. I guess the tincture will end up pink, but pink is good too :).