Bug Agaric in Herbal Simples for Modern Uses of Cure (1897) 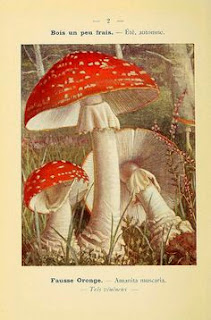 The following is from Herbal Simples for Modern Uses of Cure (1897) by by William Thomas Fernie:

The pileus of the Fly Agaric is broad, convex, and of a rich orange scarlet [369] colour, with a striate margin and white gills. It gets its name, as also that of Flybane, from being used in milk to kill flies; and it is called Bug Agaric from having been formerly employed to smear over bedsteads so as to destroy bugs.

It inhabits dry places, especially birchwoods, and pinewoods, having a bright red upper surface studded with brown warts; and when taken as a poisonous agent it causes intoxication, delirium, and death through narcotism. It is more common in Scotland than in England. This Mushroom is highly poisonous, and therefore the remedial preparations are only to be given in a diluted form.

For medicinal purposes a tincture is made (H.) from the fresh fungus: and a trituration of the dried fungus powdered and mixed with inert sugar of milk also powdered. These preparations are kept specially by the homoeopathic chemists: and the use of the Fly Agaric has been adopted by the school which they represent for curatively treating an irritable spinal cord, with soreness, twitching of the limbs, dragging of the legs, unsteadiness of the head, neuralgic pains in the arms and legs (as if caused by sharp ice), some giddiness, a coating of yellow fur on the lining mucous membranes, together with a crawling, or burning, and eruptive skin. In fact for a lamentably depraved condition of all the bodily health, such as characterises advanced locomotor ataxy, and allied spinal degradations leading to general physical failure. Just such a totality of symptoms has been recorded by provers after taking the fungus for some length of time in toxical quantities.

The tincture should be used of the third decimal strength, five drops for a dose twice or three times a day with a spoonful of water; or the trituration of the third decimal strength, for each dose as much of the powder as will lie on the flat surface of [370] a sixpence. Chilblains may be mitigated by taking the tincture of this Agaric, and by applying some of the stronger tincture on cotton wool over the swollen and itching parts alt night.

"Muscarin" is the leading active principle of the Fly Agaric, in conjunction with agaricin, mycose, and mannite. It stimulates, when swallowed in strong doses, certain nerves which tend to retard the action of the heart.

Both our Fly Agaric and the White Agaric of the United States serve to relieve the night sweats of advanced pulmonary consumption, and they have severally proved of supreme palliative use against the cough, the sleeplessness, and the other worst symptoms of this, wasting disease, as also for drying up the milk in weaning.

Each of these fungi when taken by mistake will salivate profusely, and provoke both immoderate, and untimely laughter. When the action of the heart is laboured and feeble through lack of nervous power, muscarin, or the tincture of Fly Agaric, in a much diluted potency will relieve this trouble. The dose of Muscarin, or Agaricin, is from a sixth to half a grain in a pill. These medicines increase the secretion of tears, saliva, bile, and sweating, but they materially lessen the quantity of urine.

Belladonna is found to be the best antidote.