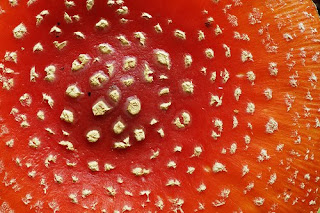 I've now been taking fly agaric mushroom for nine months. I've found that it makes a huge difference to the chronic fatigue, cognitive and memory troubles that result from my neuroborreliosis (chronic Lyme disease).

Since I could find no real information on taking the mushrooms medicinally in this way, I tried different methods, probably focussing too much on the tincture. Luckily I had dried quite a few mushrooms, so was able to compare the different methods.

The effects of eating small pieces of mushroom seem stronger and longer lasting that the tincture, with a slower release. I've still made use of the tincture though, for external application and for a quick cognitive "shot" under the tongue.

Dried fly agaric is used to treat Lyme-like symptoms in sub-arctic areas where Lyme disease is endemic, for example in Pacific Siberia:

Fly agaric serves the neurological functions of the human body in alternative medicine. The mushroom has been used to treat varying nervous disorders, dementia, dizziness, and Parkinson’s disease.

Fly agaric is still used in Siberia and Russia especially by elder people to reduce fatigue, to give more strength and to raise the spirit. They mostly make a tea, boiling either dried or fresh cap of mushroom in water for some time. They add honey to the tea and drink it by small portions. It is also considered that Amanita muscaria heal illnesses, connected with aging – sclerosis, insomnia, angiospasm etc. Some people believe that fly agaric has antitumor and immunostimulating properties.

Fly agaric is far and away the best treatment I have tried since finding out that I have chronic Lyme disease (neuroborreliosis). There are probably many facets to its action, but the most important one is the muscarine in the mushroom enabling nervous system signals to jump over the Lyme neurotoxins that clog up the neuroreceptors.

The amount of mushroom needed does vary, due to the differing amounts in individual mushrooms, and the current level of neurotoxin load. It is hard to estimate the size of a daily piece, as much depends on how much it has been dried, and how much of its water content it has lost. Starting with a piece the size of the top little finger joint is perhaps the best way to go. If nothing has happened in half an hour, another piece can be taken.

At no point have I felt even remotely "trippy" - only "normal". It is like awakening from an enchantment. Suddenly you can think again, you can move, you can remember. There's no need to lie around trying to summon the strength to do the slightest little thing. It's done almost before you've started to think about doing it. I have had regular blood tests to check liver function, and everything has been totally fine.

I feel the mushroom has restored enough of my cognition and memory for me to live, though I am not (quite) yet working again. It has also given me the energy to have a good country walk of a few miles every day. This exercise has been of immeasurable benefit to my lymphatic system and my general well-being, including happiness levels. Especially as for three and a half years I could barely walk, and thought I would be stuck in a wheelchair for life. This was before I found out that it was Lyme disease behind it all.

If you would like to discuss any of this further, please do not hesitate to contact me. I may not update this blog again, as I'm going to concentrate on Fighting Lyme Disease, showing how you can make herbal treatments to treat and beat the Lyme.